“I was a single dad for years, and then I got married to a wonderful person,” the former police officer says. His marriage made him happy, and that was part of his problem. “When you truly find happiness, you get happy all the way. I got happy, and got content, and got fat.”

By the time he hit 250 pounds, he knew something had to change. He had “had enough”, and he had to do something. But he also knew that in order for it to stick, it would have to be convenient and easy—or “idiot proof,” as AJ adds.

“I didn’t want to meal prep,” he says with a laugh. “I just wanted someone to tell me, ‘This is what you can have for breakfast. This is for a snack, and for lunch and for your dinner.’”

One day, he stumbled across the Paleo program with Saskatoon, and it stuck in his head. He had heard people talk about the program before, and after learning more about it, thought that it could be the perfect fit. Knowing that having a boring, monotonous diet would never work for him long-term, he was excited to see the variety in the weekly menu where the menu changed every week—and to have someone lay out his meal plan meal-by-meal for him. So, he signed up.

AJ did a few things that would prove to be catalysts toward success. First, he decided to keep a record of his progress, week by week. One of the perks of the Saskatoon Paleo Meals program is a weekly check-in when Edmund would review AJ’s progress and would make recommendations and adjustments to the meals. There are a number of different protocols—regular, lower calorie, very low carb/keto, intermittent fasting—and Edmund will switch clients back and forth between programs, depending on how they are doing.

Second, he set a goal.

“I love to go to Las Vegas—just for the energy and the people watching and everything,” AJ says. “So I told my wife, ‘If I ever get the weight off, we’re going to Vegas, I’m going to be rocking the all black Bradley Cooper suit from The Hangover, and we are going out on the town.’”

Week by week, AJ tracked his progress toward that goal. In the first week—December of 2017—he dropped 13 pounds. 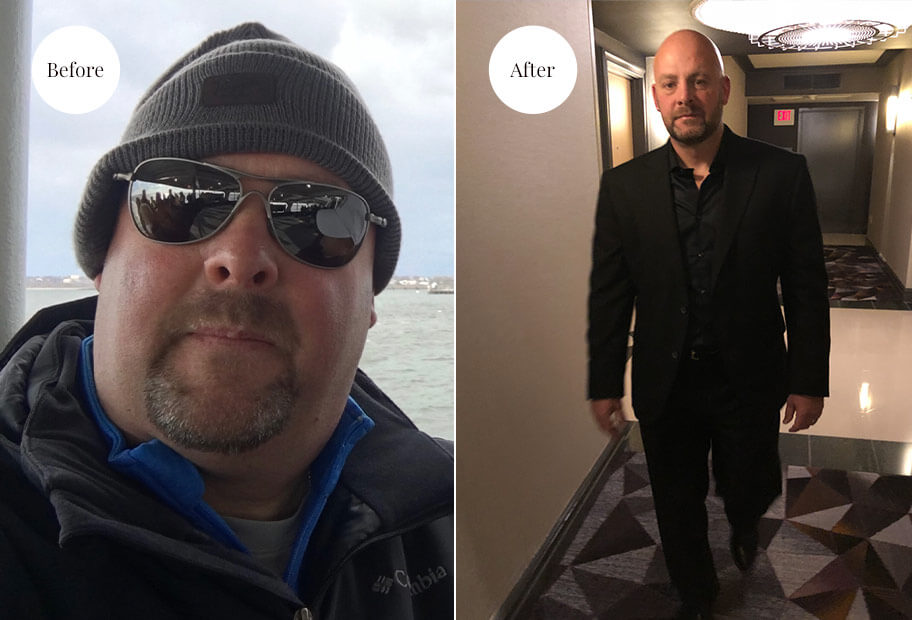 After that, he lost anywhere from two to six pounds every week, just by following the plan. As weight came off, his energy increased and he headed back into the gym. He re-learned how to eat, and how to pay attention to what he was eating and be conscious of portion sizes. He welcomed cheat day “it got me through; it gave me something to look forward to each week,” he says. The pounds kept falling off.

He took his wife to Vegas and donned the infamous black suit. And, he says, it’s something that anyone on the Saskatoon program has the potential to do.

“It’s so simple, you just have to do it. If you follow what Edmund says to do and just eat what you get each week, you can’t mess it up.”

Edmund says it was a pleasure to work with someone who had such good motivation and the discipline to stay with the program. “AJ just kept at it. He stayed true to the program. He worked out. He was great!”

Since that point, AJ has managed to keep the weight off, and now stays active and lean. He continues to keep track of his macro intake and what he eats, and stays conscious of portion sizes. He’s even recommended to a number of his friends that they join the Saskatoon program, too.

“It all came down to changing the way I ate, but it was the simplicity of the program and if you stayed loyal to it, then it worked,” he says. Still, he quickly notes he could have easily ended up in a different place, had he not stumbled upon the program all those months ago.

“It was out of control there for a while,” he says. “But you know what? I really appreciate this program. You guys helped get my life back in order.”

If you’ve been considering a change in your diet or food lifestyle and want to learn more about the Saskatoon Paleo program, click here.