A Unique Plan for a Unique Lifestyle

As a single mom to two kids and an owner of a dance studio, Christy found herself busy all of the time. But when it came time to take care of herself, her diet always took a back seat.

“I’ve done all the fad diets,” she laughed, “I’ve done fasting, I’ve done the eating only protein and no carbs, I’ve literally done it all.”

Her fad diets turned towards convenience when she and her kids were too busy with life and they started frequenting drive throughs and getting fast food multiple times a week. “Sometimes,” she admitted, “I would do a crock-pot meal but really we were eating out so much.”

While Christy maintained an active lifestyle, her diet wasn’t supporting keeping it up well.

“I’ve always been into fitness, and in addition to the dance studio, I walk, weight train, and take stretch classes,” she said. But throughout the day, she was finding it increasingly difficult to get food prepared, and would snack on the kid’s food or eat what was left over.

As a long-time customer of Saskatoon Lodge and follower of our social media, Christy saw a social campaign for our Paleo program and became curious. In her mind, she had struggled with what foods work for her body composition for years, and knew that diets and meal plans are never one size fits all.

“I tried the whole ‘don’t eat carbs’ thing, but in reality I needed more carbs because of how much I workout daily,”she said. “I had the workouts down, but I had to get the food right. This was my chance.” 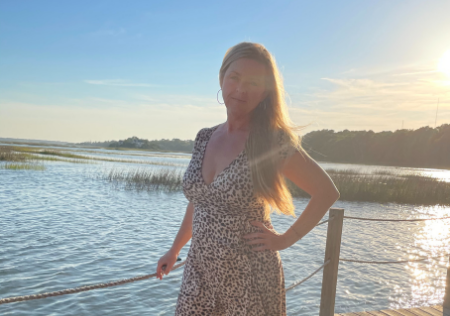 Her first impression of the Saskatoon Paleo program was how easy it all was. With pre-measured out portions, she could heat it up quickly or bring meals with her in a cooler. One of her favorite things is centered on how good the food tastes and knowing the description of calories, carbs, fats, and proteins. It’s not a haphazardly thrown together meal, but well-balanced and perfect for her fitness journey. In the 12-week plan, she would report in to tweak the meals as she needed. Currently, she’s adjusting her carbs and protein intake as she’s working to build more muscle. “I weigh a little more now, but it’s muscle mass.”

Now, after a year of the Paleo program, her love for her body’s health has shaped her attitude towards food. She loves how her clothes fit and how she feels day to day—even to the point that when she and the kids go on vacation, she notices a lot more bloating when she comes home.

“We eat out when we’re on vacation, and from eating things my body doesn’t have daily, I notice a drastic change,” she noted.

But even more drastic was the change she found in herself—and in her abilities.

“Being in dance my whole life, my knees and hips were heavy from some extra weight,”she says, noting that running was never in the cards for her work outs. “But now that I’ve kept that weight off, I can run in my workouts, which is huge!”

While Christy is fortunate to live near the Lodge, she encourages those even far away to try out a Paleo lifestyle.

“Especially for those who aren’t able to tolerate processed foods, the Paleo meals have helped tremendously. My entire body feels drastically different,” she said. “I would encourage people to try it out if they haven’t.”