How Ethan Schaefer Used Paleo to Ramp-Up his Workouts

An active runner who leads a rigid schedule and life, Ethan is a self-proclaimed lazy cooker and recognized a need for change.

“I’ve always been really active and played sports growing up,” he said. “I wasn’t a runner at first because I’ve stayed about 220 my whole life, but it started getting tough on my body.”

In college, he had a “see something, eat something” mindset that led to late night pizzas, milkshakes, CookOut, and whatever else he could get his hands on. “I would say it's not a well-balanced diet at all,” he laughed. He did a lot of flag football in college and broke his foot playing basketball and tore his ACL skiing. “I kept getting injured.”

Soon, he realized he wasn’t accurately fueling his body for the level of activity he wanted to perform. “Honestly, I started getting to where I was having fainting issues for early morning workouts. I didn’t have any energy.”

“I’ve been going to Saskatoon for years and I knew the food was high quality.” When he found out about the meal program, he wanted to know more immediately and after subscribing, was pleased with the portion sizes. He’s been off and on the plan for the last five years and recently re-committed to be on it as he works on his long-distance running.

“Honestly, I started getting to where I was having fainting issues for early morning workouts. I didn’t have any energy.”

With the injuries he’s endured, he knew he needed food that would counteract inflation. “Paleo does a great job of regulating what types of food you’re eating, and if you have had previous injuries I highly encourage this meal plan.” Running used to be out of the picture for Ethan, but now it’s what he loves doing the most. In fact, after starting the Paleo meal plan, he was able to cut 35 pounds off and started running 5ks, 10ks, and half marathons. 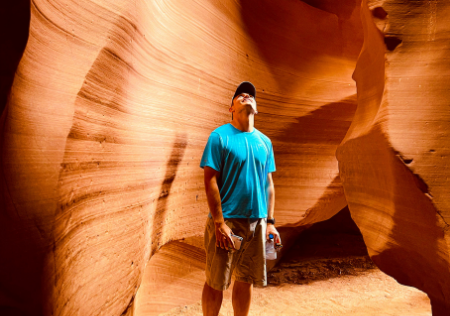 “It’s the combination of convenience and energy so I can run every single day, and that’s very important to me,” said Ethan. He mentioned how recovery is much faster now and is solid fuel for him every day. Now, he has plenty of energy all day long and doesn’t have issues with feeling lightheaded.

For Ethan, the salmon dishes were one of his top meals. “To be honest, I overdid it by getting too much salmon,” he laughed. “I still love it, but now there’s this chicken curry that’s incredible. I ordered that multiple times!”